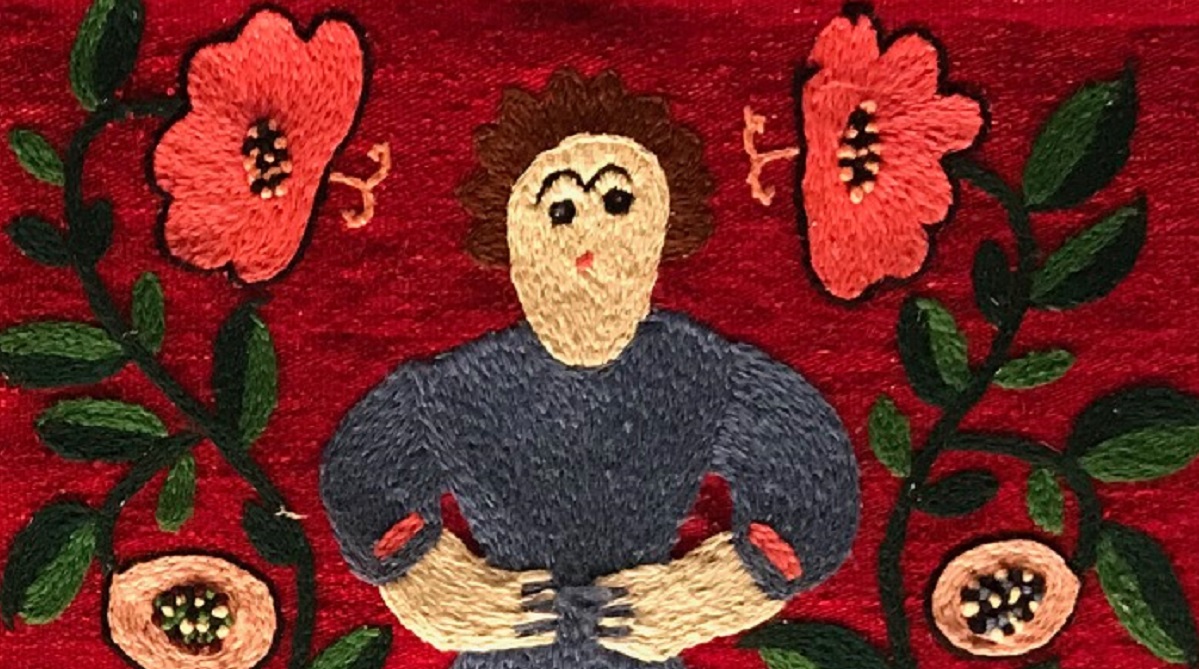 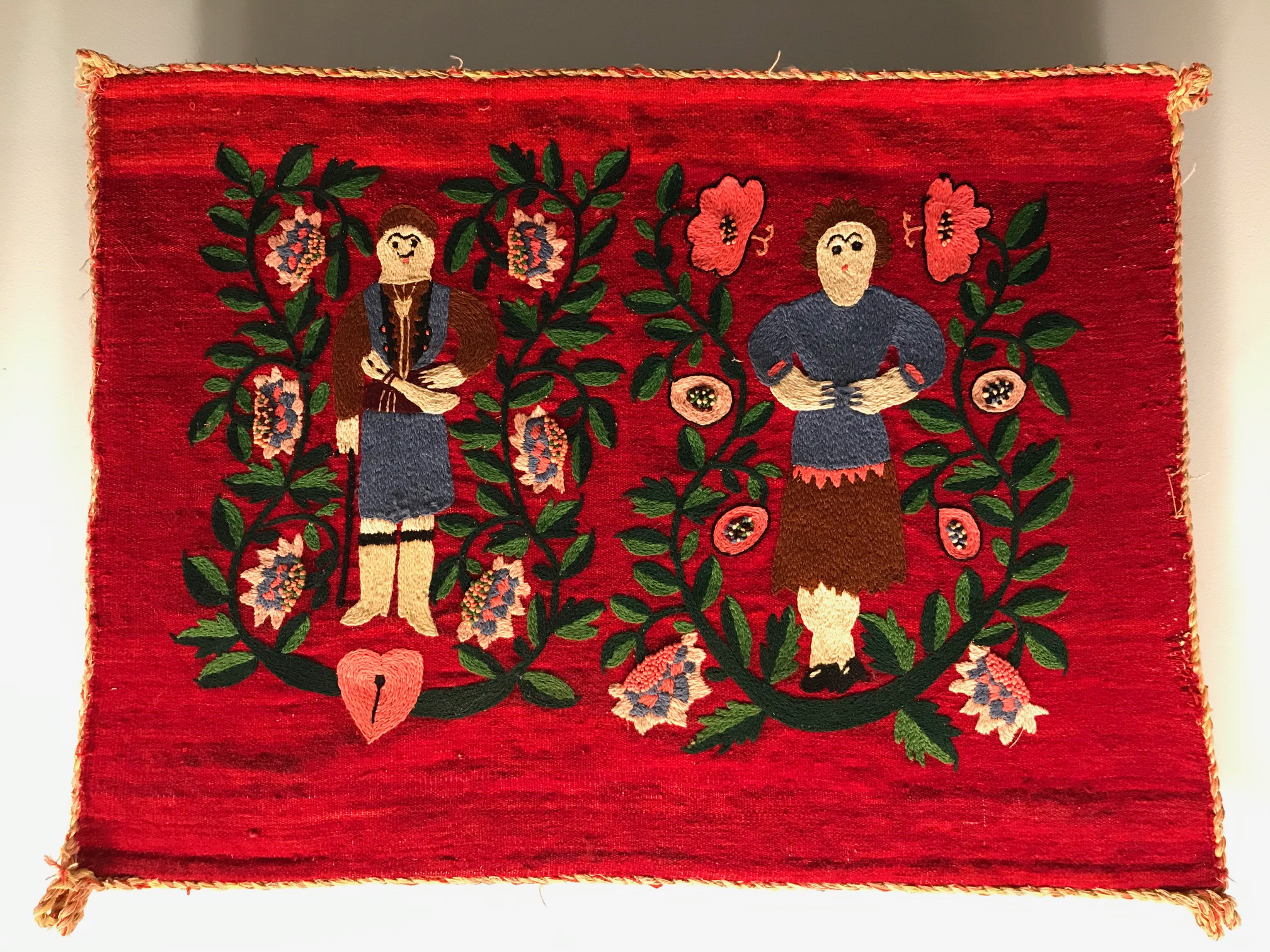 Cretan women, as is the story of women all over the globe, are the storytellers and culture-keepers of the family. They ensure the continuity of the family's oral history, participation and continuation of the cultural life-ways and traditions. Their art and their stories need to be written, studied and appreciated. My late mother Patricia encouraged the women of our village, Rodakinon, to continue their weaving in spite of the onslaught of modern "conveniences." She  collected weavings and embroideries produced locally and from all over the island of Crete. I owe my ancestors – especially my female ancestors, my mother, my aunts, my grandmothers, cousins – a  debt of eternal gratitude for all that they have given me especially strength of spirit and a great appreciation of family, culture, and the arts.

This imaginatively woven pillow cover was created for a Cretan girl's trousseau. A young woman from Crete had to impress upon prospective in-laws that she was of the character they sought; and that she had a sturdy constitution so that she could bear healthy sons and be strong for the many tasks and heavy burdens village women had to endure. Critically important for a nifi (bride) was mastery of domestic skills, including weaving, embroidery, crocheting, and lace-making for the creation of a trousseau—everything a young bride would need in her home: pillow covers, pillow cases, bed spreads, blankets, embroidered sheets and woven blankets, table cloths and covers—truly a plethora of finely executed pieces to adorn her home for the rest of her life. These pieces would be stored in a wooden carved chest with dried rose leaves. A young woman's trousseau—including furniture—was once carried from her family's home to her new home on the backs of mules; now however a trousseau is carried in the back of a truck.

The young woman who embroidered this pillow cover, while not producing a finely executed piece of embroidery, nonetheless put her best effort forward to depict a scene of married life. On the left, her prospective groom is pictured as a youthful palikari (Cretan warrior), complete with mustache, boots, knife, and tasseled head scarf tied around the forehead. The girl appears as modern—with bobbed hair and a fashionable dress.

All marriages were arranged, and many young women married husbands substantially older than themselves. Dowry (prika) was given by the bride's family to the groom and his family. Prika could include land, money, livestock, and the bride's trousseau. My own father had immigrated to the United States, and as a law student, had to work day and night to earn the $2,000 that a prospective groom had asked for dowry (among other things such as land) for my Aunt Iphigenia. Mr. Georgiades was not Cretan, but an Athenian accountant for a shipping company, and although kind, was not a good match for my Aunt. He died a brief two years after their wedding and they had no children.

Life in the village was difficult for a woman. Tasks included fetching water from the well, baking bread, housekeeping, and agricultural work, caring for the livestock, cooking, birthing and raising children. A woman's trousseau reflected her anticipated roles in the home and family. Filoxenia (hospitality and the love of the stranger), central to Cretan and Greek culture, was represented in a bride's trousseau through the many embroidered and woven items relating to the table and serving guests Greek coffee, sweets, and liqueurs.

Crete was the birthplace of the ancient Minoan civilization, where the Mother goddess and women were important in the culture and had status and freedom. It was also the birthplace of the God, Zeus. With Crete's ideal geographical position, it has been a site of conflict and conquest by those who sought it as a strategic port and trading locus, for its fruitful plains for agriculture, as well as for military use.

The ubiquitous and powerful mountains of Crete have been its solace, shelter, and protection. My family comes from the village of Rodakinon (meaning "peach" in Greek) in Western Crete, high in the mountains. There my grandmother and aunts - Eleni Demetrakaki Mamalaki, Maria Zeris, and Iphigenia Georgiades - stood bravely for our village in resistance to the Nazi invasion.  Women in Cretan society have always been strong, industrious and brave, yet in books written on Cretan history, the role of women, save for the Minoan civilization, is virtually ignored.

Cretan weavings and embroidery have some outside Byzantine and Venetian influences in the pictorial designs, especially those items made for use in the churches. The women of my family did much pictorial embroidery, however never figurative. They embroidered birds and large, voluptuous flowers and plants. They wove the vibrant heavy red blankets and bedspreads – all naturally dyed – covered with colorful, almost neon flowers and plant life that come to life on a bed or on a divan. The woven pillow cover here is of the same red hue used by my family in their weaving. The creator has also depicted flowers – however smaller in size and less fine than the work of my grandmother and aunts.

Diana Mamalaki is of Greek heritage from the island of Crete in Greece.  Her family comes from the beautiful mountain village of Rodakinon, and her ancestors were proud warriors, weavers, priests, and healers. A former Museum professional, she also worked for the New Mexico Department of Indian Affairs.  Diana is an artist, and a docent at MOIFA and MIAC; she volunteers at the Wheelwright Museum, and teaches art to elders in Santa Fe.