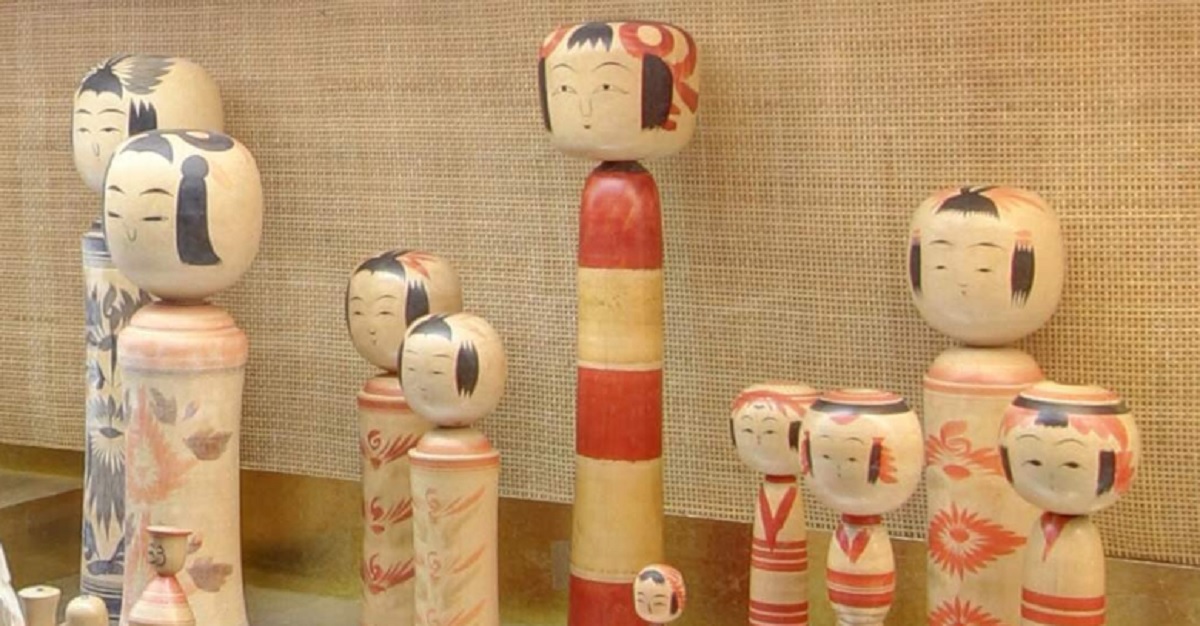 Ever since I was a child, I have loved (and collected) dolls of all kinds. On my first (and each subsequent visit), I have fallen more in love with the dolls in Alexander Girard’s Multiple Visions: A Common Bond at the Museum of International Folk Art in Santa Fe! There are dolls from all over the world, from many diverse cultures, created in so many styles using a vast array of techniques and materials. They are all absolutely delightful, both for children and adults alike. I have spent most of my professional academic career studying and teaching the language and culture of Asia, particularly of Japan. It is no surprise, then, that I especially love all of the Japanese folk toys and dolls, most especially the kokeshi.

Perhaps the most popular and best-loved folk dolls of Japan are the kokeshi—simple, handcrafted wooden dolls with cylindrical bodies, roundish heads, and no arms or legs. The origins of the kokeshi are unclear. Legend has it that they originated with Prince Koretaka (844-897), the eldest son of Emperor Montoku (827-858). Some scholars believe that their origins are linked with the mulberry stick figures (oshira-sama) used by shamans to invoke protection from the gods for good silkworm harvests. Others believe they developed from unpainted pacifiers/rattles (kina-kina) used in Hanamaki in Iwate Prefecture. Another idea is that they were created as memorial dolls, kept in the house to appease the spirits of the dead. Perhaps the most reasonable explanation is that were simple toys that rural woodcraftsmen made for their children as playthings using a variety of woods, including cherry, dogwood, persimmon and Japanese maple. 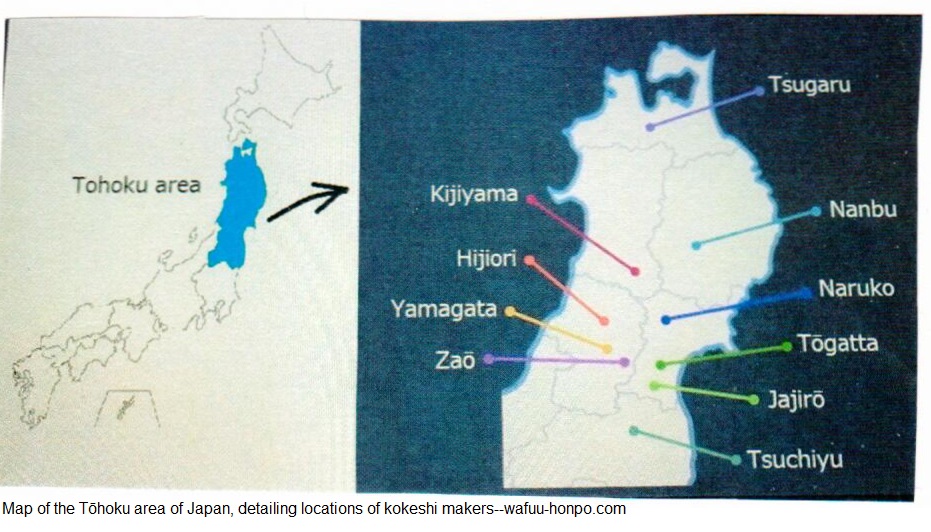 Whatever their origin, kokeshi are first and foremost a product of their environment - the cold, harsh northern regions of Japan known as Tōhoku - and are integrally linked to the rice-farming and woodworking of the area. The punishing realities of long winters and remoteness in Tōhoku created an insular spiritual outlook centered on the mountains. The rice farmers, spending long hours in the wet fields during the summers, retreated in the off-season to the many hot springs (onsen) that dot the landscape, seeking to rejuvenate themselves physically and spiritually. The other economic mainstay of the Tōhoku area, with its abundance of timber, was woodworking. Skilled artisans (kijishi) worked during the long winter months with foot-powered lathes to create wooden bowls, trays, and other utilitarian objects, using extra wood and fragments to create simple dolls as children’s playthings.

During the late Edo period, the hot springs themselves became economic centers. Woodworkers practiced their crafts as rice farmers began to take the simple dolls back to their own villages, both as souvenirs (omiyage) and as symbols of rejuvenated dedication to the mountain spirits to which the farmers looked for successful harvests. As part toy and part votive offering, kokeshi were and still are inextricably linked with the economic and spiritual rhythms of the Tōhoku region as not only popular souvenirs, but also as fond reminders of long-past childhood days. 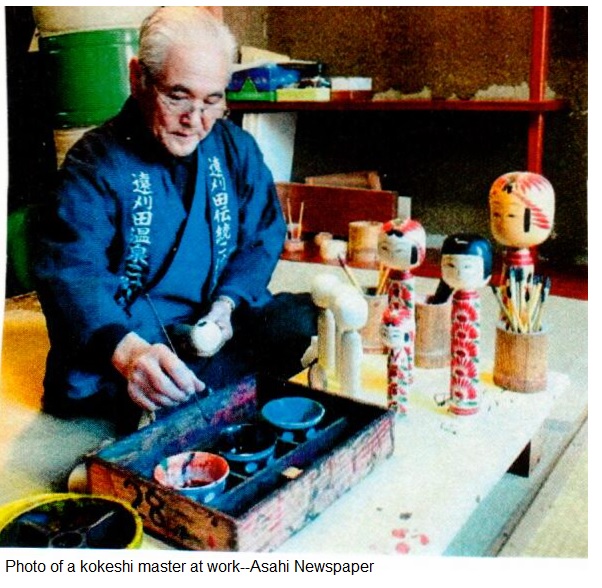 The commercial development of the abundant natural hot springs in Tōhoku led to a dramatic increase in visitors from outside the region in the Meiji era (1868). Visitors were enchanted by the simple beauty of the kokeshi they discovered in the villages surrounding the hot springs. Increasing numbers of craftsmen relocated to the hot springs to supplement their incomes. As this process continued, ten centers of production emerged each with its own distinctive interpretation of the traditional kokeshi: Tsuchiyu in Fukushima Prefecture; Tōgatta, Narugo, Yajirō, and Sakunami in Miyagi Prefecture; Yamagata, Hijiori, and Zaō in Yamagata Prefecture; Nambu in Iwate Prefecture; Kikiyama in Akita Prefecture; and Tsugaru in Aomori Prefecture.

A great deal of the artistry in kokeshi making lies in the execution of the dolls’ eyes. There are seven basic eye shapes: double lid, single lid, one stroke, whale’s eye, half moon, all black, and surprised. Many families use multiple eye treatments. There are six principal nose shapes: long, split/pine needle, cat’s nose, round nose, drumstick, and lion’s nose. Each artist tends to use the shape that best fits the particular doll, though certain shapes are closely associated with individual families (Tōgatta—split/pine needles; Narugo—cat’s nose; Tsuchiyu—long/rounded nose). Most kokeshi have similar hairstyles, with front bangs and two side bangs. Subtle differences in family styles lie in the rendering of hair thickness, length, and overall impression. The variations in the top of the head differ according to family groups: radiating circles/cap-like (janome)—Tsuchiyu, Yajirō, and Nakanosawa; front bangs continue towards the back of the head—Yamagata and Sakunami; dragonfly design—Sakunami, Hijiori and Kijiyama; carved hair element (momowara)—Yajirō and Tsugaru; and flaring radial lines (tegara)—Tōgatta.

The most elaborate element of the kokeshi is found in body decoration. Giant bursts of chrysanthemums, stacked flowers, simulated wood grain designs, free-form depictions of flowering plum and cherry trees, maple leaves, crab chrysanthemums, kimono designs, jagged lines, narrow lines, and broad bands of color all work together to create very distinctive styles. The construction of most kokeshi consists of two parts with the head and body made separately, using a small dowel extending from the head, inserted into the body. Certain styles (Narugo, Nambu) are known for the kii-kii noise the head makes when turned. Unlike other traditional forms, the Kijiyama form is executed as a single piece. 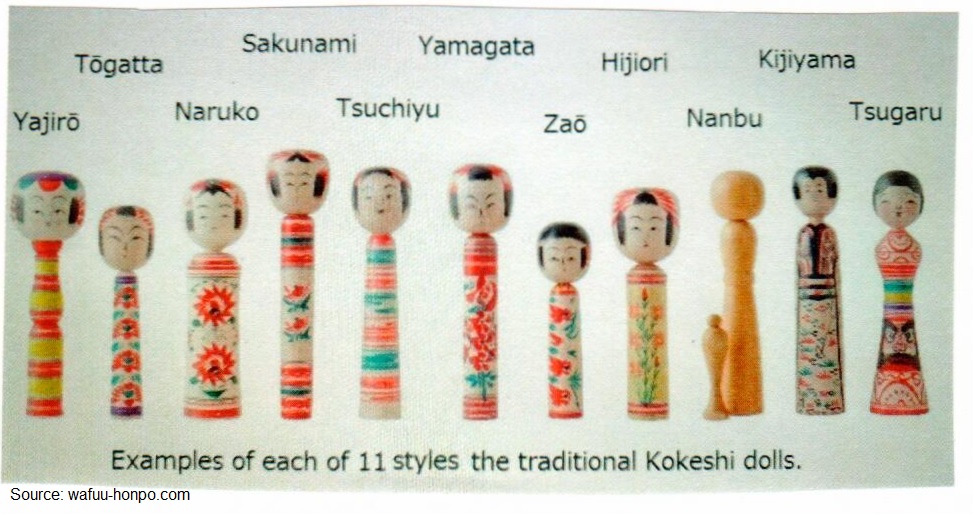 Kokeshi today are divided into two categories: “traditional” (dentō-kokeshi) comprised of the eleven types described above and “creative” (sosaku-kokeshi), first seen after the end of World War II, mostly found in towns near Tokyo. Contemporary kokeshi making, having begun in the early 1940s, grew and flourished during the 1950s, 1960s, and 1970s. As Japan’s access to Western ideas dramatically increased in the post-war period, sosaku kokeshi artisans sought to use newer, contemporary 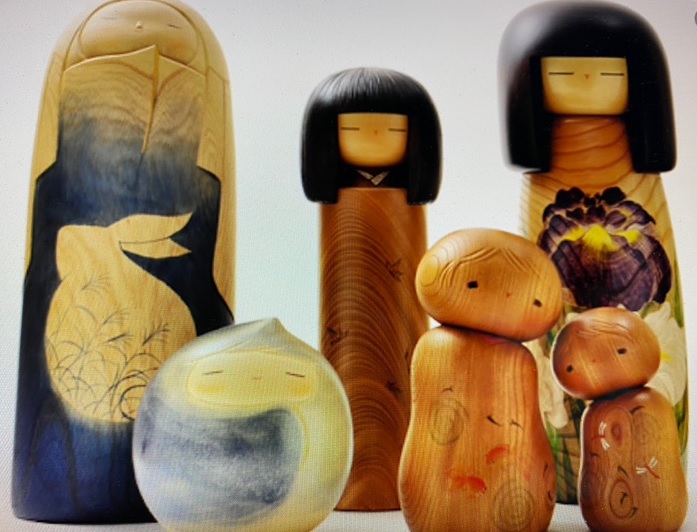 approaches, resulting in the dazzling array of imaginative forms displaying diverse themes, forms, media, types of wood used, color, decoration, and application of different methods of carving, chiseling, and wood-burning techniques that we see in present-day creative kokeshi. The themes used by contemporary kokeshi artisans fall into several categories, including iconic Japanese scenes, historical and literary motifs, everyday objects, and a celebration of the seasons. The arts of Japan have a long, rich traditional connection to the four 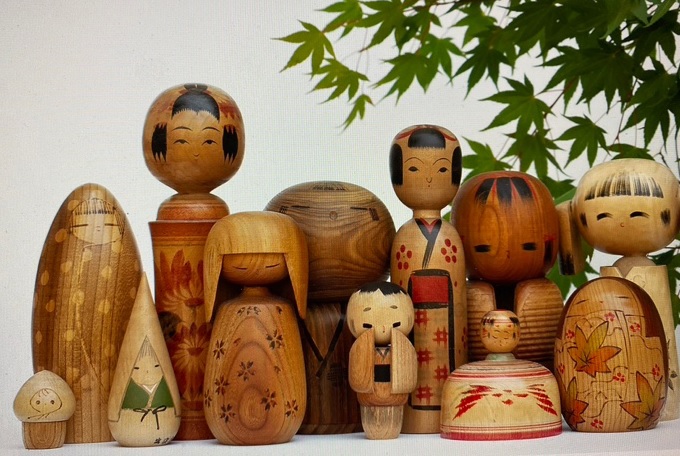 seasons, with sasoku kokeshi being no exception. Visual seasonal symbols are often incorporated into the design, color, and decoration of kokeshi, including plum and cherry blossoms, iris, bamboo, festivals, maple leaves, chrysanthemums, snowy pine trees, heavy winter clothing, among others. It is noteworthy that contemporary makers of kokeshi have successfully integrated a traditional respect for the importance of nature (especially the part that forests have played) in the daily lives of the Japanese people) with fresh, innovative approaches. 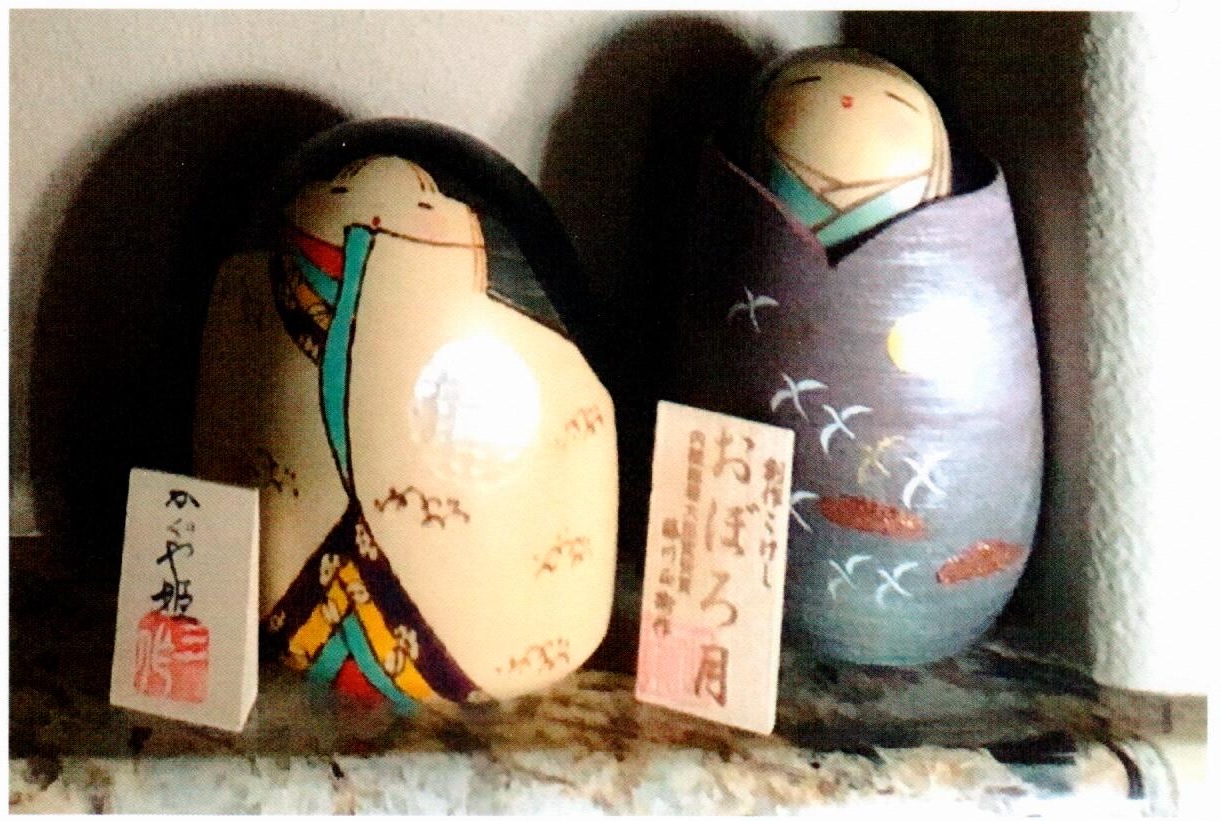 From the personal collection of Carolyn Culhane: "Two of my favorite Kaguya-hime dolls (from Taketori Monogatari—The Tale of the Bamboo Cutter)."

Carolyn Culhane and her husband Keith moved to Santa Fe from Texas in the Fall 2019. Carolyn taught for twenty years at the University of Mary Hardin-Baylor (Belton, Texas) in the Departments of Education and Modern Foreign Languages (Japanese: English as a Second Language). She considers herself to be a lifelong learner, interested in cultural studies, language learning, art history, folklore studies, among a variety of eclectic areas. Carolyn completed a post-doctoral Master's Degree (MA) in Museum Studies from the University of Oklahoma in May 2018.